A stream of people wind their way through the gravel parking lot in front of St. Paul's church on the Mission reserve in North Vancouver. Cardboard boxes are unloaded from the deck of a Squamish Nation truck. Laughter mingles with birdsong as band members wait patiently to get two cases of sockeye salmon — a prized food of the Squamish people.

Every year, the Squamish Nation distributes fresh sockeye for free to ensure the community has traditional food.

But this year is different. For the first time in Squamish history, the Nation is distributing canned salmon bearing the Squamish Nation's crest — the Nation's solution to keeping tradition alive when both fishermen and fish are scarce.

Fresh salmon is usually given out in August, but in 2015, sockeye returns were poor, so the nation distributed frozen surplus salmon and put some sockeye into cold storage.

In 2016, sockeye returns were the worst on record — and there was no distribution. A small parental generation, warm water in the Pacific Ocean and higher-than-normal temperatures in the Fraser River were blamed, and all sockeye fisheries were suspended in August.

"We had our boats ready to go," said Squamish Nation Coun. Chris Lewis. "We were out there, then the Department of Fisheries closed the [waters]."

Moreover, the salmon sitting in cold storage was getting freezer burn, so the Nation decided to try something new — they canned it.

"Most people, when they get fresh sockeye, can it right away so it lasts longer," said Coun. Lewis. "For the Nation to take that extra step, a lot of people are excited." 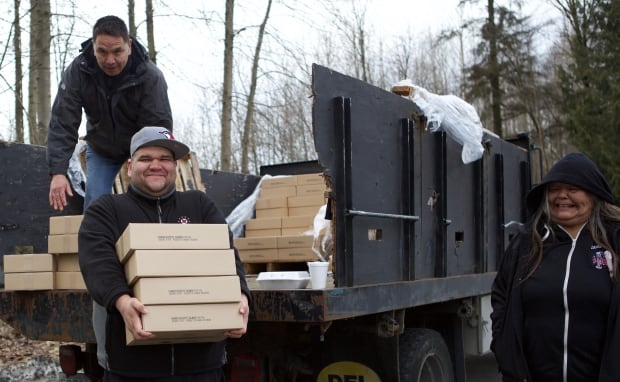 Squamish Nation volunteers unload cases of canned salmon that will be picked up by community members living both on- and off-reserve. (Emma Loy)

In August 2016, the fish went to St. Jean's Cannery, a First Nations facility in Nanaimo, B.C. The cans were ready last fall, but weather prevented distribution until this spring.

"We got a lot of calls saying, 'Where's the fish, is it actually here?'" said Coun. Lewis. "People are really excited."