For the first time since they were signed 170 years ago, the Douglas Treaties have been translated into the indigenous languages of the Sencoten and Lekwungen First Nations of Vancouver Island.

But the effort to translate them has also highlighted how differently their meanings were understood by both sides who signed them.

Between 1850 and 1854, then-governor of Vancouver Island James Douglas signed more than a dozen treaties with First Nations from Victoria to Port Hardy, exchanging about 930 square kilometres of land for cash, clothing and blankets.

The historic treaties, sometimes called the Vancouver Island Treaties, ensured that First Nations would retain their villages and fields and would be able to hunt and fish on the surrendered lands.

But Elder John Elliot, who was one of two translators who worked with researchers at the University of Victoria to produce the indigenous-language treaties that were unveiled Thursday, said that became impossible as settlements expanded beyond Fort Victoria.

"Every time there was another development on our land and in our territories ... there is another loss to the connection to a fishery or a hunting location that's ages old," he said.

Elliot said it's easy to see now how First Nations interpreted the treaties as peace agreements because tensions were growing as settlers cut down forests to build their forts and settlements and a young First Nations man was killed without reason.

"Our people understood it to be a peace treaty so that we wouldn't go burn their fort down," he said. 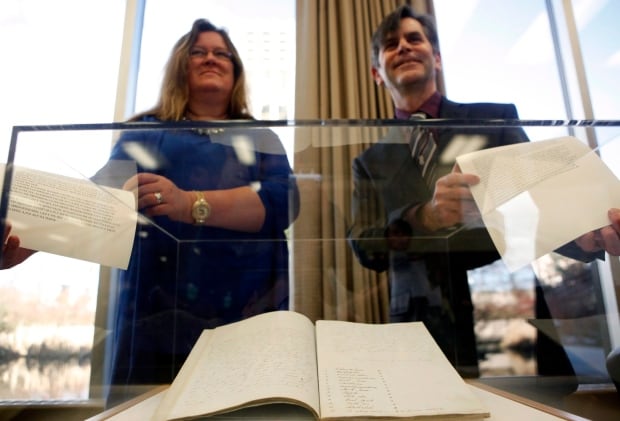 Since the chiefs did not read English, the treaties were based on verbal agreements and signed with an X at the bottom by each First Nations leader. Some of the pages were even left blank and clauses and pages were inserted by colonial authorities later.

Elliot also notes said there is a stark contrast in perspectives of land rights and resources. That's because the Sencoten language is a product of their spiritual belief, which informed their way of life and perspective on laws and ownership, he said.

"We have a belief about how each and every one of those species of salmon were made and how they came to be, and how we relate to them through our language and belief system, and all of that was never taken into consideration," he said, referring to the treaty.

While those practices should be honoured today as rights of First Nations, he said, it will be up to his community to decide whether legal action is necessary.